Background: Recently, it has been an increasing concern on the bioactivation and adverse reactions associated with consumption of herbal and nature products. 7-Ethoxycoumarin is one of coumarin family compounds, but little information is available regarding its potential reactive metabolites.

Conclusion: Most of new metabolites via oxidative ring-opening and glutathionation were identified. Species differences in metabolism of 7-ethoxylcoumarin in hepatocytes were observed. The analysis of metabolites suggests that 7-ethoxylcoumarin may undergo 3,4-epoxidation responsible for formation of glutathione and its derived cysteine conjugates, carboxylic acid and its glucuronides, glucosides and sulfate. 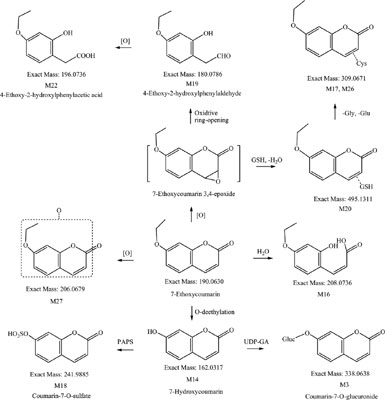