Background & Objective: Since the release of ivacaftor-lumacaftor, several red-flags have been raised that highlight the clinical efficacy of this combination strategy that may be limited due to antagonistic drug-drug interactions.

Method: The effect of ivacaftor, its major metabolites M1 and M6, lumacaftor and the novel cystic fibrosis transmembrane conductance regulator (CFTR) modulator tezacaftor at 10 g/mL on the enzymatic activity of the major xenobiotic metabolizing enzymes CYP1A2 and CYP3A4 as well as the minor enzymes CYP2B6 and CYP2C9 was assayed.

Conclusion: All in all, present findings would suggest that lumacaftor and ivacaftor-M6 are strong inducers of CYP3A4, potentially reducing ivacaftor concentrations; ivacaftor itself induces CYP3A4 to some extent. 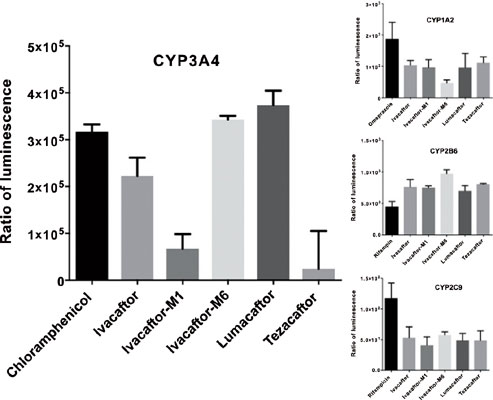