Background: CYP450 enzymes in the liver have a significant role in the metabolism of xenobiotics. Probe drug strategy is broadly used to evaluate the pharmacodynamic and pharmacokinetic drug/ herb-drug interactions/ food-drug interactions. Probe drugs reveal the exact pathway of drug metabolism in the liver by their targeted tractability property. The CYP3A4 isoenzyme metabolizes the majority of the drugs (65%).

Methods: The characteristics of targeted probe drugs were observed from the admetSAR (version2) online database.

Results: Midazolam is widely used as a probe drug because of its peculiar character. Midazolam affirms the accurate and consistent prediction of pharmacokinetic mediated drug interactions even in nanogram concentrations with or without a potent CYP3A inhibitor. Remarkably, midazolam is used as a CYP3A4 substrate in the majority of in vivo studies.

Conclusion: It is concluded that midazolam shows a good response in all clinical studies because of its lesser half-life and bioavailability when compared with other probe drugs. 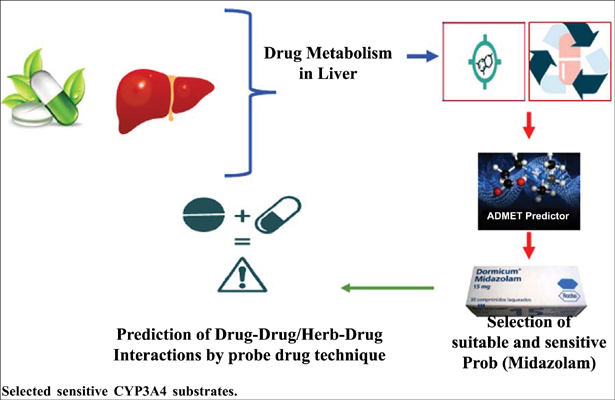