Background: Polypharmacy, that is, two (or more) drugs administered together, may cause chemical or pharmacological interactions. Such interactions may alter the effect of either agent, leading to decrease or increase effectiveness of the drugs, which may cause adverse effects. The co-intake of complementary and alternative medicines with therapeutic medicine is supposed to influence pharmacodynamics or pharmacokinetics of the latter.

Objective: This study was conducted to determine the interaction of glipizide (GZ) with an aqueous extract of Azadirachta indica (AZI) leaves.

Method: The pharmacokinetics and pharmacodynamics of glipizide was evaluated in High Fat diet (HFD) and streptozotocin induced diabetic Sprague-Dawley rats. Two doses of the AZI leaf extract (250 and 500 mg/kg) were administered alone or in combination with GZ (5 mg/kg) and serum glucose during oral glucose tolerance test, AST, ALT, and ALP levels were as estimated. In vitro CYP3A activity of AZI at 50 μg and 100 μg was assessed using liver microsomes.

Results: In the glucose tolerance test, AZI and GZ showed a hypoglycemic effect. However, the hypoglycemic effect was lower when AZI was administered in combination with GZ compared with GZ alone. AZI at 100 μg has shown significant potentiation of CYP3A activity. AZI (500 mg/kg) pretreatment significantly decreased AUC and increased Tmax to 8 h.

Conclusion: This indicated that the pharmacokinetics and pharmacodynamics of GZ altered by AZI might be due to the induction of CYP3A activity. In conclusion, AZI can decrease the bioavailability of GZ, and hence, it should be cautiously used. 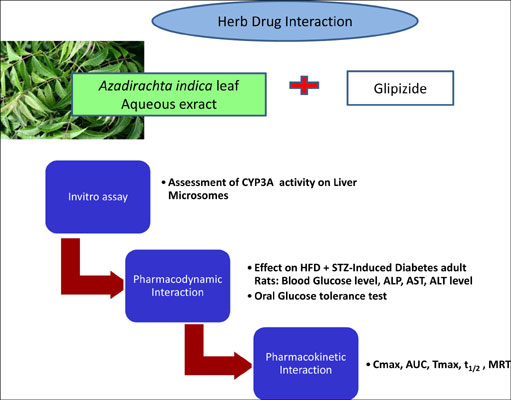